The Malaysian Armed Forces: Guardian of the nation 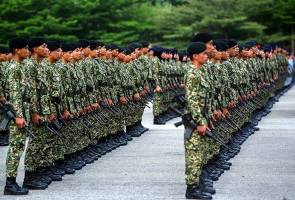 MALAYSIA will turn 62 this August 31st.

In just six decades of nationhood, Malaysia is now a success story. From a small unknown nation in Southeast Asia, its capital, Kuala Lumpur is currently one of the most visited cities in the world. Nevertheless, not all Malaysians realise that this stability may not be possible without the sincere effort of the guardian of the nation – the Malaysian Armed Forces.

This include the former Chief Minister of Sabah, Tan Sri Harris Salleh and a Malaysian businessman, Tan Sri Koon Yew Yin. They contend that the role of the military should be ‘revised’ for the development of the nation. However, it was Koon Yew Yin who recently made an unbecoming statement in the cyberspace that the Malaysian army has nothing to do but ‘eat and sleep’. As such, they should be sent to toil the fields and plantations replacing Indonesian and Bangladeshi migrant workers.

That statement received public backlash and was later removed from his blog. Following the previous modus operandi applied by YB Lim Lip Eng in the Jawi-khat issue, Koon Yew Yin later apologised for making such a statement. It is up to us Malaysians, particularly the Armed Forces whether or not to accept the apology.

The Minister of Defence, YB Mohamad Sabu has issued a statement on Friday, 16 August 2019 condemning those who insult the Malaysian Armed Forces as ‘enemies of the state’.

Anyone who insults the Malaysian Armed Forces also undermines sanctity of the Second Principle of the Rukunegara, ‘Loyalty to the King and Country’.

For centuries, the Malays have fought vigorously to defend their homeland ever since the era of the old Kingdoms of Langkasuka, Srivijaya, the Sultanate of Malacca and other kingdoms that emerged all across the Malay Archipelago. Srivijaya was a premier regional economic and military power in Southeast Asia in the ninth century AD.

The Malacca Sultanate rose to pre-eminence in the fourteenth century AD as a result of good governance with considerable military strength.

When Kedah was attacked by Siam in the eighteenth century AD, the Malays fought back tirelessly to safeguard the independence of their homeland.

During the Second World War, Lieutenant Adnan Saidi from the Royal Malay Regiment confronted the Japanese without fear although all hope was lost in protecting Malaya from the wrath of the Japanese military might.

After Malaya gained independence in 1957 and Malaysia was formed in 1963, Kuala Lumpur engaged cordial relationships with many nations all around the world. Malaysia has always utilised diplomacy in resolving international disputes.

Although Malaysia is not at war at the moment, the Armed Forces worked relentlessly around the clock to ensure that the sanctity of our international borders is preserved so that Malaysians could live peacefully in comfort.

Without peace and stability, Malaysia would not be able to develop rapidly. The Human Development Index (HDI) issued by the United Nations placed Malaysia at the 57th place out of 189 nations in 2017 – amongst the highest in the world.

Therefore, it is not surprising that five of our universities in 2018 were in the ‘top 300’ in the world, as reported in New Straits Times on 8 June 2017.

The Global Peace Index 2019 placed Malaysia as the 16th most peaceful nations on Earth out of 163 countries worldwide, outdoing developed nations like United Kingdom, Sweden, France, Norway and Belgium.

When other nations are still grappling to maintain peace and stability, Malaysians live in harmony and this is made possible by the efforts made by the Malaysian Armed Forces. Malaysia will not go this far if the Malaysian army did nothing but eat and sleep.

As a businessman, Koon Yew Yin has to realise that the wealth he gained in Malaysia was as a result of political and economic stability supported by the Malaysian Armed Forces. If the Malaysian Armed Forces is only capable of ‘eating and sleeping’, it is not possible for businessmen like Koon Yew Yin and others to build successful business empires.

Instead of making fun of them, Koon Yew Yin on the other hand should thank the Malaysian Armed Forces that has worked day and night to ensure Malaysia is secure, conflict-free and hospitable for him and his family. In fact, according to the Global Peace Index 2019, Malaysia is much safer than his ancestral homeland, China which is at 110th place. The beautiful and majestic world city of Hong Kong is also at the moment experiencing turmoil and instability.

Malaysians should learn to be more grateful and realise how lucky we are to be Malaysians. As Merdeka Day is approaching, let us show the love to our nation by thanking the Malaysian Armed Forces, regardless of race and religion that have sacrificed a lot in making our home, one of the most peaceful nations on the planet.

** The views and opinions expressed in this article are those of the author(s) and do not necessarily reflect the position of Astro AWANI.